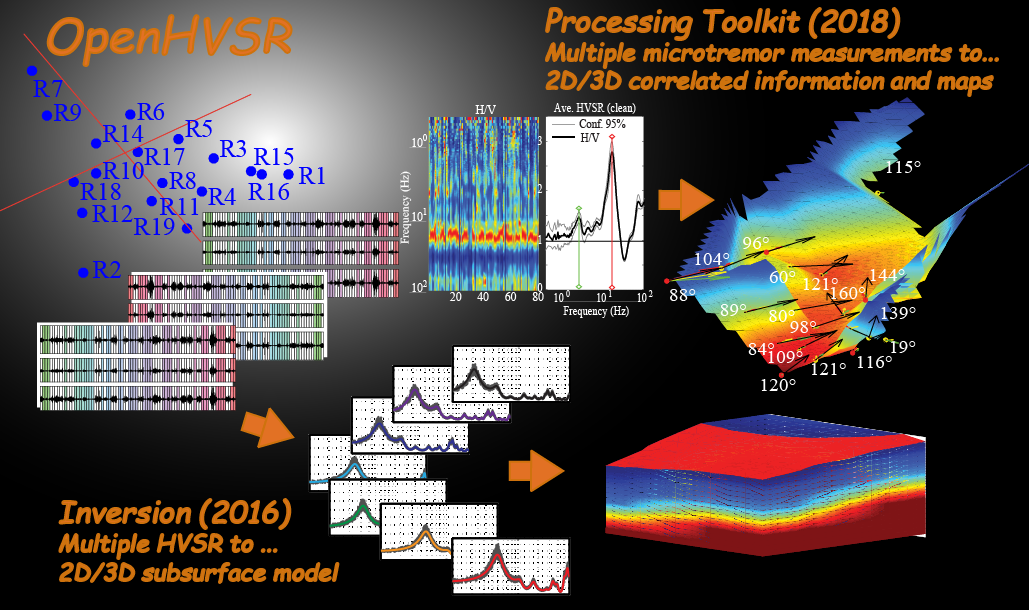 The OpenHVSR Project is a personal initiative I initiated in 2015, that slowly grew to a full-scale research project. Despite being developed with negligible funding, it now comprises two different computer programs, both developed in MatLab and dedicated to the complete investigation of microtremors. The modern single-station microtremor survey typically comprises data recorded at a multitude of sparse locations over a broad geographical area. For each measurement, a spectral ratio curve (Horizontal to Vertical component Spectral Ratio), is obtained. HVSR curves can be inverted to infer the subsurface vertical (i.e. 1D) variation of viscoelastic properties under the recording station.

OpenHVSR-Inversion
Back in 2015, I was helping a Ph.D. student who was struggling with the problem of inverting a huge number of HVSR curves in a very limited amount of time. Collecting datasets comprised of many independent measurements was becoming increasingly common at the time, but the very few software solutions were either proprietary (and somewhat costly) or simply designed to handle just one curve at a time. During my Ph.D. I had run across the same issue several times already, therefore, it was clear to me what kind of tool the student needed to complete the task in a reasonable amount of time. At the same time, I realized that one could extract a much richer insight about the subsurface, beyond the classic 1D models, just by comparing the results from different locations where the measurements were taken.
Therefore, I conceived my OpenHVSR software (later renamed "OpenHVSR-Inversion") with the specific purpose of making the inversion of large datasets quick, flexible, and intuitive.  However, I decided to create a tool not only capable of boosting inversion times but also capable of generating three-dimensional views and 2D slices of the subsurface under the investigated site. What I hoped for was to offer to the scientific community a tool capable of promoting a better understanding of the local geology. Eventually, this vision became reality in 2016, when I published OpenHVSR as open-source.

After the publication of OpenHVSR, my attention started to turn to the signal processing side. I had a new vision: create a software devoted to data preprocessing necessary prior to inversion.
Very few processing tools were available at the time. While each one implemented its own desirable features, none of them took into account the spatial distribution of the measurements. I decided that such information could be leveraged at the data processing level as well, for example, to create maps describing the spatial variation of any quantity that could possibly be extracted during the processing. At the time, creating a map of the resonant frequency (for example), not only required the combined use of several programs but one was also forced to start over from scratch should he have decided to change any processing parameter.
Furthermore, I decided to include within my software all the tools that I had encountered in other similar software and found useful and effective, possibly improving them.
Creating a processing software from scratch also gave me the possibility of including tools of my own design and other methods (e.g.  Ibs-von Seht's and Wohlenberg's method, 1999), for which no prior implementation existed.
To complete this vision, the new software would be easy to expand with new tools, and capable of representing results in 2D and 3D.

Following this new vision, In 2018 I published a second open-source software: "OpenHVSR Processing Toolkit". OpenHVSR Processing Toolkit embodies all the above design choices. In particular, map creation is now performed within the same software. As a consequence, work speed is dramatically improved and if a change in processing parameters is necessary, the effect of the change can be immediately evaluated, without the need of starting from scratch.
It incorporates state of the art tools as well as several original features that are not present in any other program. Furthermore, bedrock mapping capability, as introduced by Ibs-von Seht and Wohlenberg (1999) is included both through the computation of bedrock depth via a set of published regressions or by computing a customized regression based on the data at hand.
OpenHVSR Processing Toolkit (2018) naturally integrates the inversion software OpenHVSR (2016). Together, they constitute a complete workflow for the Horizontal-to-Vertical Spectral Ratio method.

Why open-source: I developed all OpenHVSR software with the purpose of benefitting the scientific community. I hope it will be of great use to researchers and hope it will constitute the basis for further collaborative development toward future releases oriented at exploring the potentials of the HVSR technique.