The HVSR technique from array data, speeding up mapping of paleo-surfaces and buried remains. The case of the Bronze-Age site of Pilastri (Italy)

Conference - 2017 The HVSR technique from array data, speeding up mapping of paleo-surfaces and buried remains. The case of the Bronze-Age site of Pilastri (Italy) 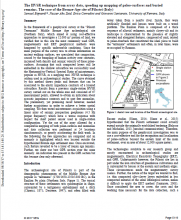 In the framework of a geophysical survey at the “Pilastri Terramara” Middle Bronze Age archeological site (Northern Italy), which aimed at using cost-effective approaches to investigate a 12.000 m2 portion of land, we verified that in this site the most commonly used GPR, magnetometry and ERT geophysical methods were hampered by specific unfavorable conditions. Since the main purpose of the survey was to obtain information on ancient walking surfaces, we speculated that compaction, caused by the trampling of human activity over centuries, increased both density and seismic velocity of these paleo-surfaces. Assuming that such compacted layers still lie embedded in the shallow subsurface we successfully used the Horizontal-to-Vertical Spectral Ratio of microtremors, popular as HVSR, as a mapping tool. HVSR technique is seldom used in archaeological studies. The curve obtained by this method shows peaks and features that can be associated to the elastic impedance contrasts of a layered subsurface. Results from a previous single-station HVSR survey carried out on the whole area and consisted of 67 measurement points, allowed to obtain an indication about acoustic impedance contrasts and to spot few anomalies. The preliminary, yet promising result however, needed further acquisitions in order to achieve a better spatial sampling. We then tested microtremors acquisition using a linear array of seismic prospection geophones (4.5 Hz proper frequency) which have a worse response with respect the short period sensor used in single-station configuration. Yet the use of the array allowed for a comparable mapping of both paleo-surfaces and anomalies and data collection was performed at 24 locations simultaneously, so greatly accelerating the field work. In the following the two approaches are compared and an anomaly is highlighted which was located outside the hypothesized Bronze Age settlement area. Once excavated, such feature revealed to be a layer of roman age remains. Further, we show our best GPR section over the same anomaly. An indication was present in the GPR section but this became clear only afterward.

Available on the SEG internet site