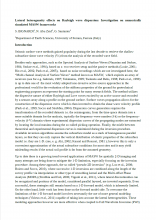 Seismic surface wave methods gained popularity during the last decade to retrieve the shallow subsurface shear wave velocity (Vs) from the analysis of the recorded wave field.
Besides early approaches, such as the Spectral Analysis of Surface Waves (Nazarian and Stokoe, 1984; Stokoe et al., 1994), based on a two-receiver setup and the passive methods (Louie, 2001; Rix et al., 2002; Park et al., 2005), based on noise recordings which are not investigated here, the “Multi-channel Analysis of Surface Waves” method known as MASW, which exploits an array of receivers (see for e.g. Gabriels, 1987; Tokimatsu, 1995; Tselentis and Delis, 1998; Park et al., 1999) is up to date one of the most widely adopted non-invasive active-source approaches in the professional world for the evaluation of the stiffness properties of the ground for geotechnical engineering purposes an represent the starting point for many research fields. The method utilizes the dispersive nature of either Rayleigh and Love waves excited by an active source and recorded by a sensors array along a profile on the ground surface. Surface waves propagation allows for the construction of the dispersion curve which is then inverted to obtain the shear wave velocity profile (Park et al., 1999; Socco and Strobbia, 2004). Dispersion curves generation requires the transformation of the recorded datasets i.e. the seismograms, from the time-space domain into a more suitable domain for the analysis, typically the frequency-wave number (f-k) or the frequency-velocity (f-V) domain where experimental dispersion curves of the propagating modes are extracted by locating the local maxima during the so-called picking operation. Finally, the misfit between theoretical and experimental dispersion curves is minimized during the inversion procedure. Available inversion algorithms assume the subsurface model as a stack of homogeneous parallel layers, so that they can only capture the vertical distribution of elastic properties of the subsurface model i.e. they are 1-D. (see, e. g. Aki, 2002; Kausel and Roesset, 1981 ); however this is only a convenient approximation of the actual subsurface conditions for most sites and it may yield misleading results if the actual soil profile is far from the assumed geometry